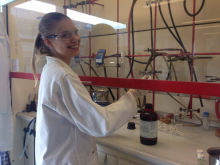 Supramolecular polymerization is a well-established method for the preparation of materials with advanced properties.1Introducing chemical reactions in water-soluble supramolecular systems emerges as an important milestone for the development of new applications in the field of biocompatible materials.2In this project, we aimed to develop a series of small molecules capable to self-assemble in chemically active supramolecular polymers. The molecules consist of a benzene-1,3,5-tricarboxamide (BTA) central core linked to the aliphatic alcohol spacers of different length. The water solubility of such molecules was achieved by converting the terminal hydroxyl groups in corresponding phosphate derivatives. The self-assembly behavior of the phosphate derivatives was probed by UV-vis. Furthermore, preliminary results proved that these phosphates can be rendered chemically active by reacting with 1,1'-carbonyldiimidazole (CDI).

In conclusion, a convenient synthetic route toward BTA-phosphates was developed during this project.