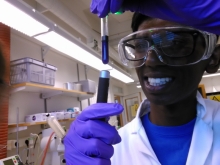 It is imperative that solar cell efficiencies increase in order for solar technology to be adopted as a substantial energy source. A standard silicon solar cell absorbs visible light effectively. However, it is limited in absorption of infrared light. Similarly, organic solar cells absorb high energy visible light well but not low energy visible light. Thus, photon up-conversion proves to be a powerful method to up-convert low energy photons so that the higher energy photons produced can be absorbed by the solar cell, increasing efficiency. The project involves the design and synthesis of new solid state materials for triple- triplet annihilation (TTA) photon upconversion.

By building a macromolecular system, we try to increase the yield of upconverted photons by making the process occur intramolecularly instead of intermolecularly. Therefore, no molecular diffusion is necessary. The synthesis of this polymer uses Sonogashira coupling which replaces a halogen with a triple bonded carbon and a “R”group. Lastly, we want to compare photophysical characteristics of the molecule alone, two generations of dendrimers, a hyper-branched polymer, and a linear polymer to identify differences in upconversion ability.