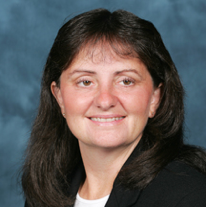 Professor Pollock is a world-renowned expert in the science and technology of advanced structural alloys with applications in aerospace, energy and automotive industries.  She holds degrees from Purdue University (B.Sc. 1984) and MIT (Ph.D. 1989). Her professional career started at GE Aircraft Engines, where she worked in the development of advanced superalloys for gas turbine engines.  In 1991 she joined the MSE faculty at Carnegie Mellon University, where she was Alcoa Professor until 1999.  In 2000 she moved to the University of Michigan, where she held the L.H. and F.E. Van Vlack Professorship of Materials Science and Engineering. In 2010, she joined the Materials Department at UCSB where she is now serving as Chair of the Department.

Professor Pollock is the recipient of numerous honors and awards, most notably her election to the National Academy of Engineering in 2005 and election as TMS Fellow in 2009 “for seminal contributions in the understanding of high temperature alloys, and for distinguished leadership in materials education and the materials profession”.  She has been honored both for her contributions to the literature (2008 AIME Raymond Award, 2005 Magnesium Technology Award) as well as for excellence in teaching (1995 ASM Stoughton Award) and overall professional accomplishment (1999 ASM Silver Medal, 205 IMR Lee Hsun Award, 2007 ASM Jeffries Lecture).  Professor Pollock was TMS President in 2005.